Located in the city of Tsukubamirai in Ibaraki Prefecture, the Totetsu Training Institute features flowing lines reminiscent of train tracks embedded in its floors, paving the way for different rooms.

Motivation Inc. created the signage, which is shortlisted in the graphic design category of the Dezeen Awards 2022, to embody Totetsu Kogyōthe central identity of as a company that serves the Japanese railway system and to inspire the trainees who frequent the building.

The studio wanted the design to be intuitive to follow, with environmental cues helping to elicit an instinctive response while barely relying on text.

“When kids see stripes on a crosswalk, don’t they try to jump over the white part?” Motive Inc founder and director Takuya Wakizaki told Dezeen. “Or if there are circles on the ground, aren’t they playing hopscotch?

“Nobody tells them what to do, nobody teaches them the rules. But their actions come naturally,” he continued. “I always try to design in a way that encourages unconscious action.”

In addition to effectively guiding people around the ground floor, Wakizaki wanted the design to have impact when viewed from above.

“We secretly but carefully considered making the rail and the graphics look better from the upper floors because the building has an open ceiling space,” he said. 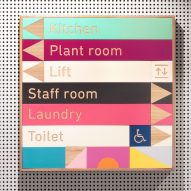 The railway tracks run continuously over two different areas of flooring in the building. Porcelain tiles near the entrance are inlaid with industrial-looking steel lines while in the hallways the pattern has been created using vinyl flooring in two different colors.

The steel lines had to be laid at the same time as the tiles, which, according to Motive Inc, required “extremely precise construction precision” from the contractors to fit the pieces perfectly together.

In both areas, the lines have a reddish, rust-colored appearance to evoke actual train tracks, while white text in Japanese and English indicates where the lines lead.

In addition to the train tracks, Motive Inc’s wayfinding design includes details fabricated using industry scrap and a color-coding system for second floor parts based on the train lines served by Totetsu Kogyo.

The scrap metal features in the building’s main signage, encased in a concrete retaining wall at the front, while internally it forms the risers of the staircase.

The color-coded system includes matching key cards that open room doors. Placed side by side, the key cards combine like a puzzle to create route maps.

Wakizaki founded Motive Inc in 2019. The company specializes in wayfinding design and has worked on projects in Japan, Romania and China.

Other memorable wayfinding projects have come from Australian studio Toko, which designed signage for a day care center in Sydney based on colorful building blocks, and Studio dn&co, which created floor markings inspired by circuits for a technology center in London.